Mythology has it that Dates were given to Mary for consumption when she was expecting Jesus. Known for its rejuvenating properties, this tradition of consuming dates during pregnancy and general health is followed till date. Dates have been part of the stable diet in the Middle East and African regions, where they are mostly grown. It has a natural sweetness and mild yet distinctive flavor, which is satisfying, both when consumed as a fruit and as an ingredient in many dishes as formulations.

Apart from its great taste, it is packet with nutrients making it one of the most health single foods available with almost 70% of its flesh constituted as sugars, in the form of easily digestible glucose, making dates as a quick source of high energy. 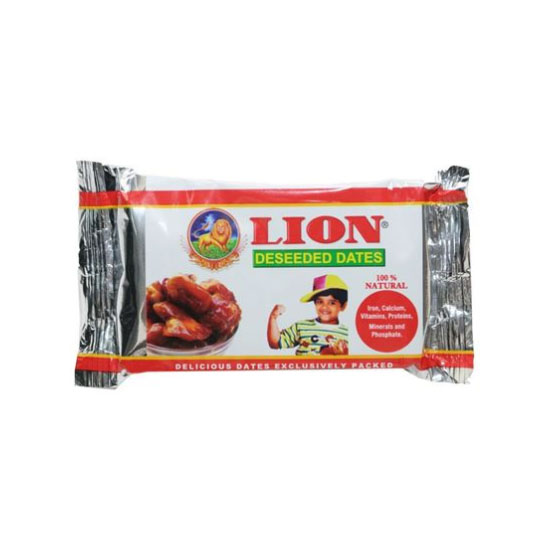 You're viewing: Lion Dates (500 gms) REFILL $3.00
Add to cart
We use cookies on our website to give you the most relevant experience by remembering your preferences and repeat visits. By clicking “Accept”, you consent to the use of ALL the cookies.
Cookie settingsACCEPT
Manage consent

This website uses cookies to improve your experience while you navigate through the website. Out of these, the cookies that are categorized as necessary are stored on your browser as they are essential for the working of basic functionalities of the website. We also use third-party cookies that help us analyze and understand how you use this website. These cookies will be stored in your browser only with your consent. You also have the option to opt-out of these cookies. But opting out of some of these cookies may affect your browsing experience.
Necessary Always Enabled

Performance cookies are used to understand and analyze the key performance indexes of the website which helps in delivering a better user experience for the visitors.

Analytical cookies are used to understand how visitors interact with the website. These cookies help provide information on metrics the number of visitors, bounce rate, traffic source, etc.

Advertisement cookies are used to provide visitors with relevant ads and marketing campaigns. These cookies track visitors across websites and collect information to provide customized ads.

Other uncategorized cookies are those that are being analyzed and have not been classified into a category as yet.